The curtains were now opened in the upstairs bedroom facing the garden, always Grandmother’s bedroom to me, but in reality Freud’s bedroom until he died, and Anna Freud’s bedroom when she became ill towards the very end of her life and where she died.

Visiting as a teenager, I responded to the light in this large airy room, the painting of Grandmother’s mother by her father, Louis Comfort Tiffany–if memory serves–over her bed. I responded to the cut flowers Grandmother always had in a vase and the photos she had of my father here and there from when he was a boy in Vienna. I liked to go to the windows and gaze out at the garden.

With light now coming into Grandmother’s room, I searched for signs of her. Very little evidence remained, even though this room was hers for over thirty years. I was horrified to see a little placard on a table saying something like: Miss Burlingham was a companion and colleague of Anna Freud for many years and slept here. MISS Burlingham! If she had been MISS Burlingham, that denied the existence of her marriage and of her four children; therefore, of my father, of my sisters and brothers, and of me.

How narrow an opening does one have to adjust a telescope in order to FIX a certain vision for the public to see?

I had some moments by myself sitting on a bench in the garden. It was a beautiful day. The garden afforded breathing room and straightforward enjoyment. 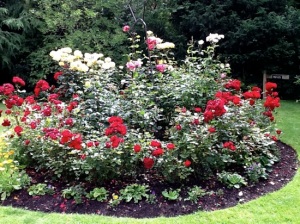 Finally, I went up the side stairs to the top floor, a whole floor–to what was once Anna Freud’s consulting room, now a large office for about five museum workers, containing Anna Freud and Grandmother’s library and archives of their work, primarily of course, Anna Freud’s.

Having never been in this room before, I now saw THE PLACE where my father had come for so many years to, I imagined, lie down on Anna Freud’s analytic couch–which was still there, and do the endless “talking cure.”

I thought, at least there were windows, lots of windows. At least the room was flooded with light. At least…

God, I couldn’t wait to get out of that house!

***
Jesse had come to say goodbye while I was still sitting in the garden. He and Scott were off to see some London architecture.

Paul and I said our thanks to the Freud Museum Director–who had been gracious and quite understanding about my negative responses to the world of Anna Freud and Grandmother from my past.

We walked down Maresfield Gardens and found a pub on Finchley road. Over a clear soup, for my stomach was still unwell, I told Paul, “I just can’t go to Golders Green Crematorium where my father’s ashes reside (along with Grandmother and Anna Freud’s). Even after all these years, it’s all just too weird and painful. I’ve had enough of THESE PARTICULAR GHOSTS.”

I remembered the feeling throughout the whole house as told by the sign in the backyard: 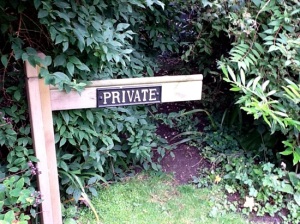 Sometimes, you shifted weight from one foot to the other for ages before Grandmother and Anna Freud’s cook/housekeeper, Paula, came to answer the door. If you walked into the dining room, it was for a particular purpose. You didn’t walk upstairs unless very specifically asked to do so. You NEVER went into Sigmund Freud’s study. The warmest atmosphere is the house was in the kitchen where Paula made us grandchildren feel welcome with her wonderful cheese straws and Austrian cookies, and outside in the garden–which was tenderly groomed, with a lush lawn and a beautifully chosen and nurtured flowers.

The house was like those Russian dolls that open to reveal another secret doll, and another and another…what secret lay in this doll, you wondered? What secrets were upstairs behind bedroom doors? What secrets were in Professor Freud’s study? Behind what closed door did my father go when he spent so many hours in this house? What secrets kept him riveted to such an atmosphere? Why did everybody act so carefully in this place? Did no one laugh out loud; get excited about ANYTHING in any normal way?

Jeez, it was enough to give you the creeps!

Today, June 30th, I was INVITED into Sigmund Freud’s study; “Spend as much time as you would like,” I was told. I have to admit I was curious. I had a vague sense of the room from my father’s memorial…something about the combination of THE COUCH, the desk, the old books, the oriental carpets, the abundance of Greek, Roman, and Egyptian artifacts had a heavy commanding commemorating-lives-of-the-dead sort of tone.

I walked right in and took it all in. 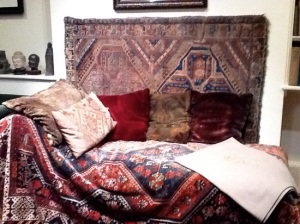 The books and Egyptian mummy masks: 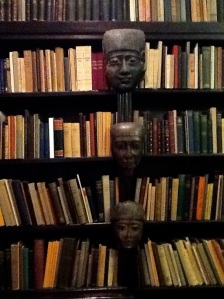 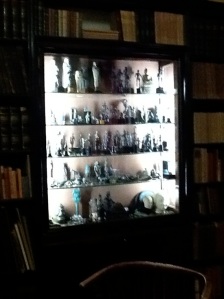 Some of Freud’s things were very beautiful, such as this sculpture of horse and rider: 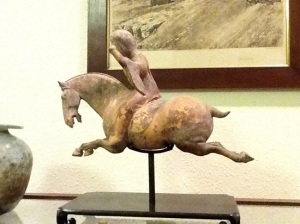 A shrine of remembrance, I thought, as I left the room: Sigmund Freud to mythological representations from the past, Anna Freud to her father. How very strange that my father’s life was marked here!

Back on my own again, I boarded the train to London. I thought about what lay ahead of me: reuniting with my husband, Paul; catching a glimpse of my two adult stepsons, Jesse and Scott, who had just done Wimbledon with their father; visiting Grandmother and Anna Freud’s house in Hampstead–The Freud Museum; visiting my father’s ashes at Golders Green Crematorium; seeing my old grammar school–Camden School for Girls; seeing my old house at 35 Queens Grove, St. Johns Wood. What else? I wasn’t sure.

The closer the train got to London, the colder I began to feel. I wished I could just wrap the warmth from Ann’s home around me and take it with me. Instead, I opened up a little old English biscuit left over from somewhere and gnawed away at that.

It didn’t help. I was REALLY hungry. I could just feel the old undertow reeling me back towards GHOSTS…

I heard my husband’s card fiddling with the hotel room door. I smiled inside.

I jumped up and hugged my husband hard, but not amorously for his boys, Jesse and Scott, were right behind him.

The four of us were scheduled for a private visit at The Freud Museum the next morning. I had very mixed feelings about this private visit, but I had set the whole thing up. I had lots of questions. Would it still look the same? Would I feel the presence of Grandmother? Of Anna Freud? Would Sigmund Freud’s presence still be in a shrine as it was when I returned in 1971 for my father’s funeral–the memorial for him in Sigmund Freud’s study? Would I feel the ghost of my father somewhere in that house?