“The church clock shone like a moon in the night sky.”

This description lifts me up by her claws and sails away with me into the ethereal beauty of nights in Norway.

On this particular night, though not austere like Alberta’s winter, the MS Richard With docked in Tromsø where we boarded a bus that drove us to the Arctic Cathedral for a candlelit midnight concert.

Afterwards, we walked out of the Cathedral in a dream state and were amazed to remember it really was still bright daylight here at one in the morning.

The next day our ship entered the Trollfjorden, our first experience of the “real” fjords Mom had talked about. Excitedly, we jammed into each other on deck trying to catch our first glimpse. 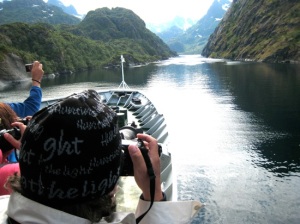 We saw jagged cliffs, waterfalls, and family dwellings at the foot of the valley, all very welcoming in feel.

Then the ship turned 360 around within a very small area– not much larger than the ship itself–and we headed out again.

The ghost I was chasing on our Norwegian Coastal voyage was the ghost of my Norwegian mother at her happiest, when her pale blue eyes would step from her face in an old fashioned, romantic dance such as the waltz with a good partner…”Norway’s west coast is so different from the south. It has the real fjords and of course the unusual light. I can’t quite describe it, but if you ever get the chance, go and see it yourself.”

And so, I went so many years after she had said the words to see with my own eyes why her eyes did that waltz.

We began the voyage from the very north of Norway: Kirkenes, six miles from Russia to the east, twenty-two miles from Finland to the south. On board the ship MS Richard With–before we had even been allowed to go to our cabin–we stood on deck as the boat pulled out from the pier on a cloudy afternoon on July 6th.

Later in the afternoon, after our first step off the boat and on again at Vardo, and heading towards Berlevåg, the clouds lifted a bit and we observed a special mixture of colors on the water–prominent over blues, a dark flecked pink.

…And then the clouds entirely disappeared and we saw stark jutting wrinkled-looking landforms such as my eyes had never witnessed before.

That night we feasted on creamed Norwegian fish soup, reindeer steaks with spiced sausage and for dessert, Finnmark cloudberries with sour cream and crispy biscuits. (I am sure this dessert was not cloudberries as listed on the menu because I know their unique orange color and flavor, having picked them with the family on our way up the mountains to my grandfather’s hutte. However, this desert was so wonderful, I’ll show you what it did look like; you can imagine how it tasted.) 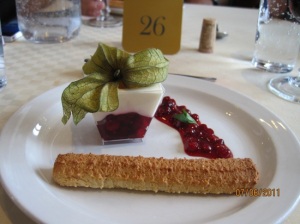 Paul and I were beginning to enjoy our first steps into this Norwegian romantic dance of the senses.